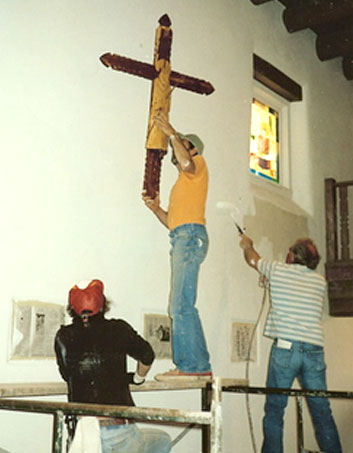 In 1916 an Episcopal mission was founded under the direction of The Rev. Frederick Bingham Howden. A vicar from Santa Fe or Raton served the little congregation until finally,
in 1932, with no permanent place of worship and the presence of a priest dependent upon weather and road conditions, the mission was closed. In December 1943 the Rt. Rev. James Moss Stoney, Bishop of the Rio Grande, and the Rev. James Kinsolving of Santa Fe
asked Helen Kentnor if she would help build a congregation in Taos.
Helen and her husband Frank had come to Taos in 1930 and had built the Sagebrush Inn.
By 1943 World War II was in progress and Frank was in Wichita, Kansas
helping with the war effort. Helen found herself running the Sagebrush Inn
and helping to start a church community.
The first services of the newly formed mission community were held in the lobby of the Sagebrush Inn. After a few services, the lobby, with its colorful paintings by Taos artists and Navajo rugs adorning the walls, was deemed “too fancy.” The mission moved first to the old Thorne House and then later to the old Masonic building, an ancient adobe structure
located on what Taoseños affectionately called “skid row.” The local mortuary supplied the chairs. The mission was called Holy Apostles, but a local humorist dubbed the group
the “Holy Impossibles.” In 1945 the mission became St. James Mission.
The dream of owning the church property became a reality when, in 1959, the Weimer family donated four acres of land for a building site. The Weimer family’s ancestors had been merchants in Taos in the 1880s. On Easter Day, 1960, the first service was held in the new Spanish Pueblo mission-style church on Camino de Santiago. In 1974 St. James Mission became St. James Episcopal Church.
Annie Clay Hall (the Sunday School/nursery room) was added in 1967, the rectory in 1969, and the parish hall and offices in 1974. Between 1976 and 1991 a storage unit was built, a casita added to the rectory, a sanctuary and crucifix installed in the back patio, and the mortgage burned.
In 1982, a 1904 Henry Pilcher & Sons pipe organ was dismantled from St. John’s Lutheran Church in Stony Ridge, Ohio and donated to St. James. More than 20,000 disassembled pieces were lovingly reassembled by parishioners. In 1998, a rebuilt organ was installed by the Roy Redman Organ Company of Fort Worth, Texas, utilizing pipes from the Pilcher organ with a key desk, pedal board, and tracker chassis from a Lyon & Healy organ built in l901 and originally installed in the First Baptist Church of Bryan, Texas.
In 2006, St. James parishioners celebrated the addition of a new worship space. The expanded chancel, nave, and choir loft accommodate the growing parish family and open the space to the light of Taos that comes through new stained glass windows.
Summer 2007 saw the expansion into an enlarged parish hall, with classrooms, meeting rooms, a large kitchen with an adjoining garden area.